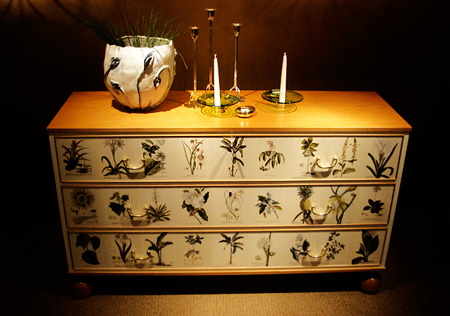 Kraft i leran (Power in the clay)

Agneta Pihlström’s clay pots radiate such a strong expression that it is almost a shame to put flowers in them. Agneta started to work in clay during a period of sick leave from her job in the advertising industry – and kneading away stress proved to be an excellent form of rehabilitation. She originally started with turning, but gradually moved on to rolling, coiling and pinching techniques. Her pots are on display at Svenskt Tenn on Strandvägen in Stockholm until 15 April.

is a collection that presents beautiful graphics of leaf and flower motifs by the artist and designer Agneta Pihlström. At the same time, the exhibition presents organic ceramics – stoneware pots and vases – for sale. The exhibition is to run until 15 April at Svenskt Tenn.

Vackraste keramiken (The Most Beautiful Ceramics)

These ceramic cups by the artist and designer Agneta Pihlström are completely irresistible. A keen student of ceramics, Agneta is a graduate of University College of Arts, Crafts and Design and previously worked as art director in the advertising sector. However, she tired of the hectic world of advertising and decided to do something completely different. She is now debuting with her beautiful ceramics at various locations, including at Svenskt Tenn. Her style is extremely organic: lots of leaves and roses, often in black and white – possibly as a contrast to the colourful and varied life she lived before. Agneta now finds peace and tranquillity in her ceramics and painting. The black and white cup (pictured) is a real dream that stimulates the possessive instinct.

“I visualise what’s inside”

How would you describe your style?

What I do is extremely organic. It comes from nature, with flowers and leaves. But if you think along these lines, there is a risk of tipping over into something sugar-sweet and diffuse – what I do is more rough and tough.

There is something that has to come out. I visualise what’s inside. This may sound a little pretentious, but that is how it is.

What is it that you want to say?

I want to express a feeling, something beautiful that I feel good about and can lean up against. It feels great to create, but then it is up to the individual to receive. The feeling of well-being is transferred to a different dimension when I create, and I never think about the intended result; I just am. It is actually fascinating.

How do you perceive the difference between ceramic art and painting – the ceramic medium is three-dimensional, after all …

I just happened upon ceramics; I am not a ceramic artist per se, it is just a fun medium to work with. What is interesting about it is that it is not a flat medium, and it is a little odd that I also paint in dimensions, layer upon layer.

Featured in, for example: